Grounds For Memories features venues no longer used where Hendon played in years gone by. Excellently written as one would expect from David Ballheimer, each article is illustrated with images of the grounds.

The writer of this excellent series is David Ballheimer, who is a life-long Hendon supporter, the club’s press officer and a vastly experienced sports journalist. David has been writing series for the Hendon matchday programme for many years; notably his ‘Hendon A to Z’, ‘Green and Gold’ and ‘Green Dream Teams’ series were all highly informative and well received.

For season 2019/20, the subject covered the ‘Grounds For Memories’ series, featuring venues no longer used where Hendon played in years gone by. Excellently written as one would expect from David, each article is illustrated with images of the
grounds. Included is an extensive section of images of Claremont Road, Hendon’s home for 80 years, looking as many supporters will remember it. With grateful thanks to those who snapped the pics.

These essays were originally published in the Hendon FC matchday programmes during the 2019/20 season. 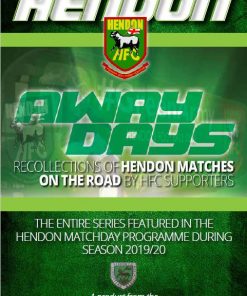